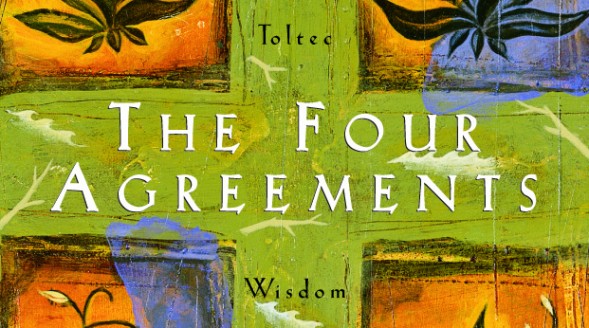 This section is all about emotions and learning about our mental health. Kimberly Elmore, an Identity Staff Writer, has dedicated her time to educate and discuss a particular emotion in each issue. It’s a great way for women to open up and become more aware of our emotions, feelings, and human behavior. All of these emotions help us understand how to Accept. Appreciate. Achieve.TM and to Feel Beautiful Everyday!TM

Over the next several issues of Identity, let’s take a different approach to better understanding our emotions. I’d like to tell you about a book that really helped me get a grasp on how I feel and why. It’s called The Four Agreements by Don Miguel Ruiz.

In The Four Agreements, Ruiz explains his belief that if each of us vows to make four agreements with ourselves then we will all live a fuller life with better understanding. Over the next several issues, I’m going to examine each agreement. I’m going to go out of order with Ruiz’s agreements, and I’m going to start with my favorite agreement, “Don’t take anything personally.” This agreement has helped me the most — although I still struggle with achieving this from time to time.

According to Ruiz, “Nothing other people do is because of you. It is because of themselves. All people live in their own dream, in their own mind; they are in a completely different world from the one we live in. When we take something personally, we make the assumption that they know what is in our world, and we try to impose our world on their world.”

A lot to digest? Sure, but this book is a worthwhile read. Basically, Ruiz believes that the reason us, as humans, have the tendency to take things personally because of “personal importance.” Ruiz defines personal importance as taking things personally and that it is the maximum expression of selfishness because we assume that everything is about “me.” Early in our lives, when we are absorbing and learning of the world around us (Ruiz calls this domestication), we learn to take everything personally and think everything is about “me.”

Ruiz believes that what other people say and do is about their own emotional baggage and poison. If someone walks up to you and says, “you’re fat,” it’s not about you, it’s about them and their own issues — or emotional garbage. In other words, that person is projecting their own feelings, beliefs, and opinions onto you — and you don’t have to absorb those projections. But, as humans, we tend to do just that. And when we do, we create a personal hell.

Even if someone does something to you that you feel directly insulted you, it’s not about you; it’s about the other person.   If you don’t take an insult personally, you won’t feel the need to defend yourself and you won’t accept what the person said to you as truth. It’s a version of that person’s truth and you don’t have to agree with that — all you have to agree with is to not take anything personally.

Ruiz says, “Whatever you think, whatever you feel, I know is your problem and not my problem. It is the way you see the world. It is nothing personal because you are dealing with yourself, not with me. Others are going to have their own opinion according to their belief system, so nothing they think about me is really about me, but it is about them.”

Another aspect of this agreement is to watch what people do more so than what they say. In other words, actions speak louder than words. “If others say one thing, but do another, you are lying to yourself if you don’t listen to their actions,” says Ruiz. “If someone is not treating you with love and respect, it is a gift if they walk away from you,” according to Ruiz. He says that if you make it a strong habit to not take anything personally, you will avoid many upsets in your life.

While reading this book, I had to stop and re-read some parts to better grasp what Ruiz was saying. It’s a relatively simple concept, but it’s hard to achieve because we are so programmed to take things personally. I’m sure each of us can think of several times when we’ve been hurt by others and took it personally. Perhaps a friend has said a hurtful thing to you or you’ve felt rejected by a significant other — reality is it’s not about you, it’s about them and their own assumptions and beliefs. “It’s not you, it’s me” may be a clichÃ© break-up line, but it conveys a truth.

When you teach yourself to not take anything personally, you set yourself up for personal freedom. It will help you eliminate negative thoughts, prevent you from absorbing other people’s ‘stuff’, and protect you from unnecessary hurt. Emotionally you will be healthier, stronger, and less likely to allow others to define who you are. This isn’t something that is achieved overnight. It’s an ongoing commitment — and like anything else, the more you practice, the better at it, in this case not taking anything personally, you will become.

In the next issue, we’ll examine the agreement of, being impeccable with your word.