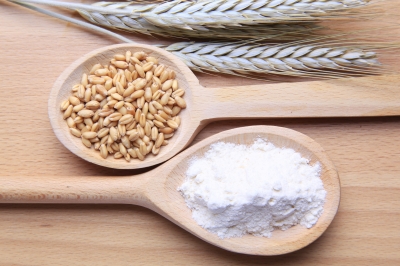 This one may not be hard to pronounce, but what exactly is enriched flour? You’ll see it on just about every cereal, cracker, and cookie box in the grocery store. But why not just say flour? What makes this flour so enriched as opposed to regular flour? The answers require a little history lesson.

Label Logic by Joann DiFabio-Klinkner is all about awareness of what is in the food you eat. How does this tie in to the Identity mission? Joann educates us in everyday language on ingredients so we can easily remember what is harmful to our bodies and what is healthy for our bodies. What we eat can, in the short term, affect our mood and our energy, and in the longer term, have a major affect on our health and nutrition. That’s why it’s an important part of helping you to have a healthy diet and to Feel Beautiful Everyday!TM

This one may not be hard to pronounce, but what exactly is enriched flour? You’ll see it on just about every cereal, cracker, and cookie box in the grocery store. But why not just say flour? What makes this flour so enriched as opposed to regular flour? The answers require a little history lesson.

White flour was adopted into many cultures during the Middle Ages because it was thought to be healthier than darker flours. They might not have known it, but white flour was actually beneficial to people at that time because mold and fungus found in the grains (that led to several diseases) was eliminated during the processing that yielded white flour. They just didn’t know how much nutrition was also eliminated from the flour during processing.

In the late 1920s, a man by the name of Benjamin Jacobs began documenting the essential nutrients lost during processing. He deemed these lost nutrients as good health-promoting nutrients that helped combat some diseases, and he eventually developed a way to put those lost nutrients back into the final product. The end resulting flour would be enriched with the lost nutrients. The birth of enriched flour.

Enriched flour became widely used during the 1940s in order to promote good health amongst all social classes of the British and United States populations while food was being rationed and alternative sources of the nutrients weren’t available. Then, in 1942, the U.S. Army decided it was only going to purchase enriched flour. That sealed the deal on enriched flour.

So what are the specifications for a white flour to be considered enriched? According to FDA requirements, each pound of enriched flour must contain 2.9mg of thiamine, 24mg of niacin, 0.7mg of folic acid, 1.8mg of riboflavin, and 20mg of iron. Except for iron, all of these nutrients are B vitamins. While everything up until now may seem harmless, here’s the kicker. The iron that is used to replace the natural iron lost during processing is actually a reduced version of metallic iron. The body has no use for metallic iron, and it may actually be toxic to your body.