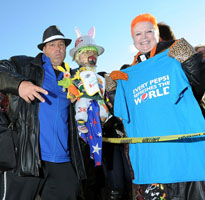 Realizing our true identity is something that takes time and effort.  For Barbara, it took years of living in a world of crises until she realized that she could make the necessary changes – even if just one step at a time – to become the woman she was always meant to be. It is often the littlest things that can change our identity, or for Barbara, her ‘Eye-dentity.”

My self-esteem was as sparse as my eyebrows, which were almost invisible!   My mom had little if any eyebrows, as well. She seemed to have brow bone that took the place of eyebrows and she certainly had loads of “back bone.” She was musically gifted, a classical pianist, maybe a genius, but she kept taking lessons to improve! In retrospect, she might have been happier had she been like her more glamorous sisters, but we will never know because she died in 2000. I might have likewise avoided all glamour existence, identity, etc., for an alternative “tom-boy” like existence if not for finding my eyebrows! As a result of adding to my sparse eyebrows, I have gained a new “eye”-dentity!

Previously I was lacking in self confidence, so much so that I felt that instead of belonging, I was a quiet alien, even to myself. I used to attribute this “differentiation” to all kinds of bullying, abuses, etc. For instance, one of my earliest memories was of my mother saying, numerous times, “I wish I never had you,” to me and my younger brother. Because of this, I drank whatever was in the liquor cabinet at just 10-years-old when my parents would go out, and continued the drinking until I was about 50-years-old.

I focused on whatever it took to just survive.   I seemed to draw into my life all kinds of crises, especially “stormy and unstable relationships, for the most part,” (an exception was approximately 15 years as an airline flight attendant). I was always just living, barely living at all, always living on the edge of existence. I was unable to focus on future existence.

Gradually, almost imperceptibly, I began to extricate myself from what may have been an addiction to crisis.   I began to become aware of how the crises of my childhood made up a kind of practice identity that I believed was what I had to master in order to survive at all. I BELIEVED CRISIS WAS LIFE ITSELF! Then I believed for the longest time that I just had to make stability somehow come out of the chaos that was my childhood and family existence.   Now I know that the ANXIETY   OF AMBIGUITY can be a source of much creativity, innovation and pleasure, if   it can be viewed as possibilities and potential, instead of only the “dark (shameful i.e., being the “black sheep of a family, etc.,) side” of life. But now I know that kind of survival was wanting to hang onto a crisis identity, basically a family identity, even the despised black sheep identity, at any cost rather that risk choosing a powerful identity of my own making, namely “giving birth” to a family of oneself.

It took me a long time to take the, at first, baby steps needed to stop being the baby that my mother never wanted to grow up (or one of the three babies that she wanted to socially “engineer” to remain under her emotional control, as if she could “play” her children like the notes on her piano). I had a baby face, I was a baby boomer and a late bloomer, but what really helped more than almost anything else was when I allowed my eyebrows to “bloom”, of course with the help of eyebrow pencils and my intuition of where my eyebrows might belong, had there been more than I was given naturally!

Now I am grateful to just have eyebrow pencils, and I may still have an addictive type identity personality, etc., but it’s focused now on collecting eyebrow pencils in various colors, oh, and kisses, too!

1. What have you accepted in your life?

It took many years of patiently, and sometimes impatiently, being resilient to get to know what I was missing: eyebrows!

2. What do you appreciate the most in your life?

I am grateful that I “paid my dues” and had a RELATIVELY hard early, adult, etc., life, (who has an ABSOLUTELY hard life, after all if you at least survive) because I now can enjoy the little things in life, like the basics in life.

3. What is one of your most rewarding achievements in life so far?

I am able to take quality of life issues less seriously (perhaps I still take life and death issues too seriously, who knows?) This may be because I found my lost sense of humor. I’m trying to make my work be the play I missed out on, due to a childhood, etc., taken too seriously.

4. What is your not-so-perfect way?

What   concerns me a lot now, is that I might be be prevented from sharing the observations and reflections on   my past, unless I am able to re-frame the “darkness”, or write about my life as if it were fiction, or even that I may need to use a pen name or hire a ghost writer because I may have made SOOOO many bad impressions previously and I may need to make serious life ammends. It may be hard to know wwhere to start, and I may need help with this. In fact, I may have to learn a whole new way of acting, speaking,etc. (writing?) to become more like others and I may have to take acting, etc., lessons, just to act, etc,. more like others, because I am learning that there may very well be a possibility of being too unique to even comprehend yourself and your identity!

For now, though, I love my “eye” identity and my identity too.