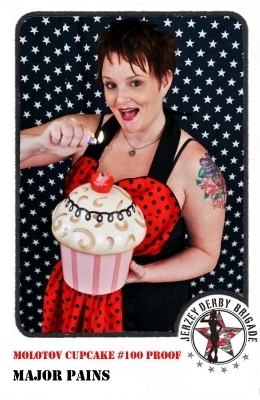 Soon after I turned 40, my marriage fell apart and our divorced was final. I found myself alone for the first time in many years, without a partner, feeling hurt and betrayed and confused. People sometimes tell you not to do anything drastic after a huge life change. However, I’ve never been someone to follow the crowd. So I did what any middle-aged, slightly depressed, completely lost woman would do.

Divorce can change someones life for the better or for the worse. It is all how you deal with the aftermath. For Molotov Cupcake, her divorce allowed her to try new things – including her new favorite hobby: women’s roller derby. Divorce is an obstacle that is difficult to overcome, but it makes you stronger – and in this case, helped Molotov be prepared for the challenges she would face on the roller rink!

Soon after I turned 40, my marriage fell apart and our divorce was final. I found myself alone for the first time in many years, without a partner, feeling hurt and betrayed and confused. People sometimes tell you not to do anything drastic after a huge life change such as a divorce. However, I’ve never been someone to follow the crowd. So I did what any middle-aged, slightly depressed, completely lost woman would do after a divorce.

Drastic Change After My Divorce

I ran off and joined roller derby. Following are notes from my journal as I took in the exciting, challenging, and life-changing experience. I am officially a newbie, fresh meat, whatever you want to call it, that’s me and whole bunch of other girls. If you knew me from gym class in high school, you’d be rolling on the floor snorting right now. It’s no secret I’m not the most coordinated or athletic chick in the room. Ever.

Life hasn’t been so easy for me lately, especially after my divorce. Lots of unexpected and unwelcome changes in a short time. Throughout it all, though, I’ve tried to stay strong – mentally and physically. I haven’t always succeeded. Remember when I was going to fitness boot camp? I honestly believe that it was boot camp that forced me to get up in the morning, deal with my stuff, and be around other people – even though at that time all I wanted to do was lie down and fall apart. There were days that were so hard on me, stress-wise, I would get physically ill at boot camp. But I never stopped going. Part of it is probably because I’m a cheapskate and didn’t want to waste the money I paid. However, being around other women, working out, pushing ourselves and supporting each other was one of the best experiences I’ve ever had.

I was never the best or the fastest – and honestly, it wasn’t a competition anyway – but I was present and I tried. That’s all we can ask of ourselves. Once I started a new job, though, it was impossible for me to continue. Boot camp was 20 minutes in the opposite direction of the new job and there was no way I’d be able to make it to work on time. So I dropped it. I still work out at home using what I learned there, but I found I kind of missed the group experience. Which is weird, because I’m kind of a misanthrope most of the time.

It turns out that what I really missed was having something that was my own. I’ve been intrigued by women’s roller derby for years – from watching the crazy bouts on television in the 70s, reading other women’s blogs about it, seeing the movie Whip It. Then I read an article about the resurgence of derby in Bust magazine and I was like, “I have to try this.” And I promptly forgot about it, assuming that there were no local leagues out here in the Jersey suburbs.

A few weeks ago, on a whim, I hit Google and found out that there is indeed a local league out here in the suburbs. In fact, it’s only 20 minutes from my house. I immediately contacted the team and went and observed a practice. Two days later I spent a staggering amount of money on quad skates, pads, a helmet, wheels, a mouth guard and all the equipment. No going back now!

This past Tuesday was my second full practice. It is one of the hardest things I’ve ever done. I am frustrated when I can’t do something right, I continually fall on my ass, which is a big no-no, and I can’t hit to save my life. My thighs are killing me, I janked up my shoulder and my right ankle is permanently bruised. But guess what? I’m present and I try. For four hours a week, I am so involved in skating and learning that I am completely free of my problems. Everyone is funny and supportive and we’re different ages and sizes and skill levels. But we’re all treated equally. I watch some of the vets and I can’t even imagine that I’ll ever be as good and confident and beautiful as they are. I don’t know if I’ll ever even get good enough to pass the test that will make me a full-fledged member. But for now, I don’t care.

After surviving my divorce, I have something that’s mine again!


In keeping with the theme, Molotov answers the Identity 5:

1. What have you accepted in your life that took time, physically or mentally?
That I can get through anything. I have worked through a terrible depressive episode, and I’ve also finished derby practices I thought might kill me. As they say in derby, “You can do anything for two minutes.”

2. What do you appreciate about yourself and within your life?
I feel like I am a survivor and have held my life together even when it felt like the universe was trying to knock me out. I appreciate my friends and family, and the various pharmaceuticals that allow me to stay sane 😉

3. What is one of your most rewarding achievements in life? What goals do you still have?
One of my most rewarding achievements in life was being the first in my family to graduate college. Another was playing in my first roller derby bout. I really never thought I’d make it that far. My dream one day is to own my own cupcake shop. It’s no coincidence my derby name has “Cupcake” in it.

4.   What is your not-so-perfect way? What imperfections and quirks create your Identity?
I get very upset when things don’t seem fair to me. I like everything balanced and even. It’s probably the Libra in me. Even in my house, everything has to be in its place, where it belongs. The same in life. Sometimes that can get stifling to people, I’m sure.

5. How would you complete the phrase “I Love My…?”
…parents
…friends
…cat
…brain

Postscript: Since this article was written, I’ve joined a new team, The Jerzey Derby Brigade in Morristown, NJ, who have become my second family. I’ve been with them for a year and a half and have never been happier.