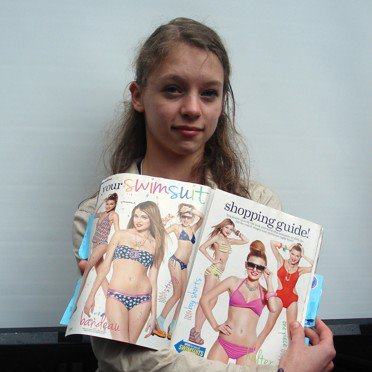 A young woman, 14-year old Julia Bluhm, has challenged Seventeen Magazine, the most widely distributed teen girls’ magazine in the U.S. Julia’s online petition is asking Seventeen to run unaltered photos to show its readers what real beauty and real girls look like. The petition was signed by 80,000 people and resulted in Seventeen acknowledging Julia’s petition.

Seventeen Magazine has finally caved in on one of the most controversial topics because one young adult received 80,000 signatures for her petition. Julia Bluhm recently challenged the teen magazine to run unaltered photos in their magazine in order to show real girls what real beauty is. Seventeen magazine was up for the challenge. Will Seventeen continue beyond Julia’s request? Has Julia started a revolution through Seventeen magazine?

I recently stumbled upon a Facebook page, The Worldwide Wars on Girls and discovered an amazing triumph.   I just hope this actually pulls through because it’ll be a fantastic step forward in today’s media, especially with one of the top leading magazines for young women.

Seventeen Magazine has been challenged!

A young woman, 14-year old Julia Bluhm, has challenged Seventeen Magazine, the most widely distributed teen girls’ magazine in the U.S. Julia’s online petition is asking Seventeen to run unaltered photos to show its readers what real beauty and real girls look like. The petition was signed by 80,000 people and resulted in Seventeen acknowledging Julia’s petition.

In Seventeen’s August issue, the magazine’s editor in chief announced that the magazine vows not to use Photoshop to alter the face shape and body sizes of its teen models and that it will feature a diversity of models with different body shapes, races, and hair textures.

Will Seventeen stick to it?

I hope that Seventeen plans to move forward each month with this vow, not just August. This can really elevate the self-esteem of many young girls as it will show them realistic body types. Let’s see the curves, our so-called imperfections and character behind the models because it will only encourage society to be less judging and more accepting.

Do you think you can join me on a media fast?  Give up negative media!?

Wait a minute, NOT Identity Magazine, we are positive! 😉 We invite women to be perfectly imperfect here!

Let’s start supporting the positive magazines that don’t even allow negative body image advertisers on their website, that don’t try to persuade you to change in any way, and that don’t have you second guessing your physical beauty or your self-worth.

I know that this is a huge step in the right direction for Seventeen, and let’s keep it going! Why just teens? Let’s not airbrush any of the models. Nice little touch ups, but no removal of cellulite, bulging, reducing or enhancing breasts, changing face features and structures for goodness sake! Let’s take it down a handful of notches, huh?

I know how important it is to educate our young adults and this movement will have an impact, but I’ll say it again and again that it is just as important to continue to educate and support women of all ages.  I’m 31 and if I don’t have confidence, I won’t be able to teach and support my nieces and nephews.  If I look into that mirror and judge myself in front of them, they will follow my actions.   Adults are also influenced each and every day and to be frank, many of us adults STILL struggle with our own confidence and self-worth. We have to be role models at every single age and to every single human being we encounter. It’s not an easy challenge, but life isn’t supposed to be easy.

Moving forward, a thank you to Seventeen for listening and supporting the 80,000 teens and make sure you look up Julia Bluhm and support her petition for Seventeen. We don’t want her to have to fight this battle alone. While you are supporting her, check out the list below of a few positive resources available for women of all ages: