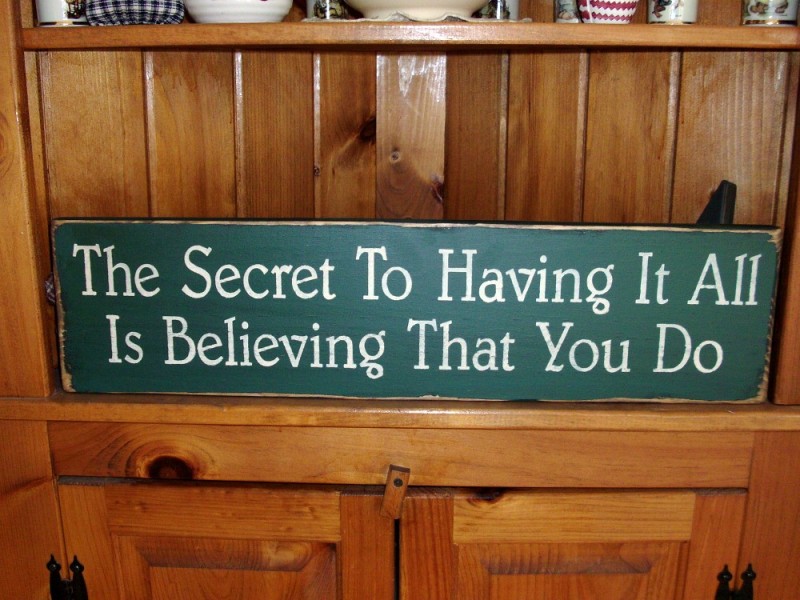 There was no need to choose between having a family and having a career â€“ you could have both. It was a seductive idea, especially for women who had grown up seeing their mothers living lives focused only the home, while their fathers could go out to work, socialize and spend time on hobbies safe in the knowledge that there would be dinner on the table, children bathed and the floors mopped when they got home. Why couldn’t women go out to work too, and their husbands help bring up the family?

Have it all? Or want it all? The only way to have it all is to start believing that we already do. After years of society telling women and men to choose only one role to play, we can finally choose to have it all in our lives. Whether it be a career, a family, or both, have it all.

One of the most important tenets of 1970s and 80s feminism
was that women could ‘have it all.’

There was no need to choose between having a family and having a career — you could have both. It was a seductive idea, especially for women who had grown up seeing their mothers living lives focused only the home, while their fathers could go out to work, socialize and spend time on hobbies safe in the knowledge that there would be dinner on the table, children bathed and the floors mopped when they got home. Why couldn’t women go out to work too, and their husbands help bring up the family?

The problem was that ‘having it all’ quickly became ‘doing it all.’ For many women, being able to have a career did not put them on an equal footing with men: it just meant they had two jobs — one at home and one out of it. In her book Wifework Susan Maushart argues that once they marry and have children, women and men fall into traditional gender roles very quickly. Women are expected to support their husbands, to look after their children, and to generally subordinate their own needs to those of ‘the family.’ Yes, they could have a career…but they would still have to do everything else too. The language that many men and women use when talking about their roles at home is telling. Men will talk about ‘babysitting’ their children when their wives go out or about ‘helping’ with the housework. These are women’s jobs and if men occasionally do them, they are doing so as a favor.

Not all families operate on these traditional gender lines. Some men are happy to share the domestic load equally, and even to take a turn at being a stay-at-home parent while their wife goes out to work. However, the default position for the majority of families is for the woman to take on most of the domestic load, even where both partners work. Recent statistics show that in families with two parents working, women spent much more time on housework and childcare than men. Even where the actual division of labor is fairly equal, it is often the woman who has to do to the ‘household thinking.’ They might have a husband willing to do the shopping but he has to be given a shopping list.

Can this be changed, or is it inevitable that giving birth to children means having to be the primary carer and household manager from then onwards? It can be changed — but women need to start creating change. It is difficult to do, as people tend to mirror their parents, often unthinkingly. Women clean the house because that’s what their mothers did. Men assume their wives will stay at home with the kids while they play golf because that’s what their fathers did. Men often feel that they ‘deserve’ perks that women just do not get. Society is, in many areas, geared towards helping men as its default position, with women in a supporting role. Health insurance is a good example — women pay much more than men simply for being women. They might get cheaper women’s car insurance, but it’s not much of a trade off.

If your domestic set-up is unequal, giving your husband all the perks while you pick up the slack, it is time to start challenging both yourself and him. Working full-time and bearing the majority of the domestic load is hard work, leaving you with little or no leisure time and feeling as if you are of lower status than your partner. It has been shown to have a damaging effect on mental health. Recognize that having it all does not mean doing it all. It means sharing it all. Women are often brought up to believe that being a ‘good mother’ is vital, and can be reluctant to share that role, even when it is making them unhappy. Similarly, men often feel that being the ‘provider’ is their role (even when their wife works) and work longer and harder when they have children, disconnecting them from the family unit and giving them an excuse not to contribute at home.

The only way to have it all is to stop doing it all, so just stop…

The only way to have it all is to stop doing it all, so just stop. Your husband might not even realize how much you do. Ask him to share the load. If he gets to have a night out with his friends, then he has to mind the kids while you have the same. If you took time off work last time the kids were sick, he has to do it next time. If you take charge of shopping, then he is responsible for laundry. Divide up your work (both paid and unpaid) so that each of you gets equal leisure time. If he argues, keep putting your point across calmly and reasonably. Ask him if he sees you as an equal partner — if he does, then he needs to do equal work. If he doesn’t, well then you have another problem to think about entirely.

Whatever you do, do not just accept that you should do more than men, or that your career is less important. It might take some adjustment (from both of you) to start working more equally. The chances are, though, that you will both be happier for it, and your kids will grow up with a great example to follow when they have their own families by working to have it all.

In keeping with the theme, Joyce answers the Identity 5:

1. What have you accepted in your life that took time, physically or mentally?
That saying ‘no’ occasionally doesn’t kill you!

2. What do you appreciate about yourself and within your life?
My ability to mentally switch between work, life and family. I work to live, not the other way around.

3. What is one of your most rewarding achievements in life? What goals do you still have?
Passing my grade 8 in classical guitar felt like a massive accomplishment. I’d like to get to one of the two geographic poles before I die.

4. What is your not-so-perfect way? What imperfections and quirks create your Identity?
One of the strangest quirks I possess is the complete inability to wash up tupperware. It really weirds me out and I don’t know why.