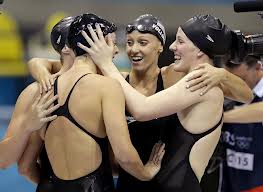 The Olympians inspire me to be healthy and take care of the temple that is my body…until I remember there’s cake in the fridge.

I’ve never been an â€œathlete.â€ As a kid, my parents went from being morbidly obese to a liquid diet, on which they lost a ton of weight and then went back to being heavier and more inactive than before. So you could say I didn’t have the greatest role models.

Being an athlete is not one of Dava’s comedy skits. Dava Krause is an Identity Staff Writer, but a comedian first. She has dedicated her time to provide Identity readers with some laughter in their lives. We don’t always have to be serious, so unwind with a laugh from time to time with Dava and Identity. Dava often reflects upon experiences throughout her life. For Dava, being an athlete was not always her strong suit, but in the end it was the mental game, not the physical game, that allowed her to overcome obstacles and realize that being an athlete started on the inside.

The Olympians inspire me to be healthy and take care of the temple that is my body…until I remember there’s cake in the fridge.

Being an Athlete means what?

I’ve never been an “athlete.” As a kid, my parents went from being morbidly obese to a liquid diet, on which they lost a ton of weight and then went back to being heavier and more inactive than before. So you could say I didn’t have the greatest role models.

I was always overweight and unfortunately uncoordinated so sports were not where I excelled. In third grade on field day we all lined up in order of speed, which I was slow. The two fastest runners would compete first, then the next fastest and so on. I was in the last heat with an even heavier girl than me and I came in last. I was officially the slowest person in my third grade class.

However, my third grade class consisted of thirty-eight privileged young women and in the feminist purportedly liberal private school I attended, it didn’t really matter if you were good at sports as long as you were smart and possessed some other creative talent. I was and I did. I was a theater geek, an A Capella singer and the class president having been elected purely on hilarious campaign speech. Not being an athlete was something that never bothered me. It was just a fact.

Swimming was the only exception. I was a decent swimmer. It didn’t involve me putting a ball in a hoop or hitting it with a bat and there was no man-on-man confrontation on any sort of field. And while my thick legs did nothing for me on land, their power seemed useful in the water.

I swam in high school. The school plays were in the fall and the spring so in the winter I was forced to take a sport and luckily swimming was an option. And since it was an all-girl school, no one gave a shit that we were in swimsuits. I remember my Junior Year this other all-girl school with whom we were competing was getting their pool renovated so they had all their meets at the all-boy school’s pool. When I found out we were scheduled to compete with them over there, I immediately had my mother schedule the Wisdom Tooth removal appointment she had been nagging me about for that exact afternoon.

I also swam at summer camp. I wasn’t great. I wasn’t even “good” per say, but I didn’t suck; I wasn’t the slowest, and to me, that was an accomplishment. During my last summer in camp I was 14 and this was the year that all my peers and I would get to be Captains of The Color War. It was like being the Prom Kings and Queens. Captains would lead their teams in spirit rallies, cheer until they lost their voices during games and then stay up all night building huge floats for the SING competition, in which they would lead their minions in fight songs (aka: popular songs with the lyrics changed such as “Blue’s Got You Beat” instead of “We got the beat” by the Go-Gos).

Being a Captain Requires Being an Athlete?

Each summer there were two girl captains per team and the heads of camp decided who became captain based on four criteria: leadership, creativity, number of years you attended camp and athletic ability. This was my seventh year at camp, I was a leader and obviously creative so I figured my strength in those three be enough to overlook my lack of athleticism. But it wasn’t.   I pretended to be happy for Jen Cohn, Jaime Green, Lauren Goldberg and Cheryl Stein but I was crushed. None of those ladies could rhyme a lyric and Jen couldn’t even lead a round of so-and-so and so-and-so sitting in a tree at dinner let alone an entire choreographed singing competition. The camp heads picked these girls   because they were athletes. Truthfully, I was probably never even a possibility. Believing You Are An Athlete IS Being an Athlete

I recently read an article in which 2008 Olympic Gold winner Shannon Miller, says, “What separates the gold medalists from the silver medalists is simply the mental game.” It hit me hard. It made me look back on that summer, my whole young life really and wonder: what would have happened if I hadn’t accepted what others said I couldn’t do as the truth? Maybe I perpetuated this truth by entering into athletic activities with the idea that I was going to be terrible at them, so I was. What if I believed I was an athlete and gave it a try? Even just a little bit? I think maybe, just maybe, you wouldn’t be looking at a member of The Camp Canadensis 1995 Blue Team, but it’s Captain.