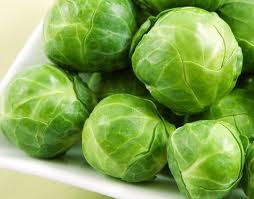 Brussels sprouts are available year-round, but are at their peak from autumn to early spring. They get their name from Brussels, the capital of Belgium, where they are thought to have originated from. Nowadays, they are cultivated throughout Europe and the United States, most of the US crop coming from California.

Brussels Sprouts is this month’s Spotlight! This column, Spotlight On…By Joann DiFabio-Klinkner hones in on a particular type of food product. Joann educates us on these foods to help us make the choice to eat it because of its goodness or not eat it due to it’s damaging affects. Read and learn about these foods so you can continue to feed your body the proper energy to achieve a balanced lifestyle diet. Now lets learn about Brussels Sprouts!

I know, I know. You’d probably rather sit through four hours of a terrible French film with subtitles than put even one Brussels sprout in your mouth. And I used to feel the same way…until I had Brussels sprouts prepared the right way. My friend Jasmin always used to swear to me that Brussels sprouts were good as long as they were prepared with a little extra pizzazz, and I never believed her. But the truth is, these miniature cabbage-looking things can actually be…dare I say it…delicious when prepared the right way. Not to mention they’re super healthy! Brussels sprouts are available year-round, but are at their peak from Autumn to early Spring. They get their name from Brussels, the capital of Belgium, where they are thought to have originated from. Nowadays, they are cultivated throughout Europe and the United States, most of the U.S. crop coming from California.

By now, it’s no big mystery that plant phytonutrients are excellent at helping the body battle against disease, including cancer. And it’s been stated that these phytonutrients are most prominent in green leafy vegetables (kale, broccoli, bok choy, cabbage). Well surprise, surprise, Brussels sprouts are a green leafy vegetable! Research has found that the sulforaphane found in Brussels sprouts helps boost production in the liver of the body’s detoxification enzymes, helping the body to rid itself of harmful carcinogens more quickly. A study published in the Journal of Nutrition also suggests that sulforaphane may help stop the growth of breast cancer cells, even in the later stages of their development.

DNA damage can also be linked to the development of cancer, since mutations in DNA allow cancer cells to develop. A study conducted in the Netherlands found that a diet high in cruciferous vegetables, such as Brussels sprouts, showed a 28-percent reduction in DNA damage. This can mean a lower risk of developing cancer cells in the body.

Brussels sprouts are also an excellent source of Vitamin C. On top of being the body’s number one water-soluble antioxidant, Vitamin C also supports the production of collagen, which aids in healthy skin, cartilage, connective tissue, and tendons. Want to feel more regular? One cup of Brussels sprouts contains more than four grams of fiber, both soluble and insoluble found in roughly equal amounts. Fiber helps nourish the cells that line the walls of the colon promoting colon health and protection against colon cancer.

Now here comes the tricky part. How do you prepare Brussels sprouts in a way that makes them pleasing to the palate? Start by choosing sprouts that are firm and vivid green in color. Sprouts of even size will cook more evenly. Check to make sure there are no wilted or yellow leaves on any of the sprouts.

The dish that had me sold was a type of brussels sprouts hot “slaw” with bacon. While you can add your own twist to it, the basic ingredients are Brussels sprouts, one half pound of thick-cut bacon, one chopped onion, one cup of shredded carrots, three tablespoons of chicken broth, balsamic vinegar, and salt and pepper to taste.

Cook the bacon as directed and set aside, but reserve the drippings. In the same frying pan, sautÃ© the onions and shredded carrots until the onions are translucent, then remove and set aside. Chop the Brussels sprouts and add to the frying pan, sautÃ©ing until there’s a good char on them, about three to five minutes. Add the chicken broth to the pan, cover it, and let the brussels sprouts steam for about two to four minutes or until soft with a slight firmness still to them. Chop or crumble the bacon into a bowl, add the brussels sprouts, onions and carrots, and drizzle with balsamic vinegar and season with salt and pepper to taste. Immediately serve this dish warm for the best taste!