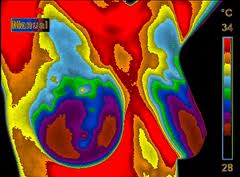 Breast Thermography is a state-of-the-art screening procedure that captures digital infrared thermal images of the breast to aid in the early detection of breast irregularities. It is based on the principle of temperature variation, or increase in heat that is generated from angioneogenesis, the growth of new blood vessels associated with pre-cancerous and cancerous tumor growth.

Thermography, is a way of detecting breast cancer and many of us are unaware of this new standard. Dr. Dave Wendel from New Jersey educates us on this non-invasive with no pain, and no radiation approach that is saving lives.

I am talking about Thermography.   Thermography, or Digital Infrared Thermal Imaging, is a non-invasive, radiation-free and painless (no compression!) screening test that detects physiological changes in the body that are produced by underlying disease or pathology.   These changes may be detected 8 — 10 years before they may show up on a mammogram.

Breast Thermography is a state-of-the-art screening procedure that captures digital infrared thermal images of the breast to aid in the early detection of breast irregularities.   It is based on the principle of temperature variation, or increase in heat that is generated from angioneogenesis, the growth of new blood vessels associated with pre-cancerous and cancerous tumor growth.

Studies have shown that by the time a tumor has grown sufficient enough to be detected by physical examination or by a mammogram, it has in fact been growing for over 7 years.   A cancer cell will double its size approximately every 90 days, therefore, at 90 days there are two cells, 16 cells by the end of one year, and over one million cells after five years–an amount still undetectable by a mammogram.   It is not until after eight years of growth–approximately 4 billion cells–that a tumor is recognizable via mammogram according to the Susan G. Komen Foundation.

The History of Thermography

Thermography has been shown to identify cancer before it becomes a visible tumor, while mammograms look for the tumor after it has formed a density.   The earlier a tumor is detected, the more successful the outcome is likely to be.   According to Michael Gautherie, Ph. D., a 10 year study published in 1981 demonstrated that abnormal thermography is found to be 10 times more significant as a future risk indicator for breast cancer than having a history of breast cancer in your family.   A 2008 study performed at Cornell and written by the American Academy of Breast Surgeons and published in the American Journal of Surgery showed a 97% sensitivity rate in identifying malignant tumors.

At what age should women start with Thermography screenings?   The United States Preventative Services Task Force has changed mammogram guidelines to be age 50 — 74 and every other year.   However, all women can benefit from Thermal Imaging.   It is imperative for women between the ages of 20 to 40 since there is no current standard of Breast assessment.   Yet there are over 20,000 new cases of breast cancer detected in this age group every year in the United States, and they are likely to be a more aggressive form of cancer.   We at BTI recommend a scan post puberty, then every other year beginning at age 20 until age 30, at which point we recommend testing yearly thereafter.

With thermography as your regular screening tool, it is likely that you would have the opportunity to make adjustments to your diet and lifestyle to transform your cells before they became concerns.   Talk about true prevention!   Thermography is safe, even for pregnant and nursing women.   Younger women with dense breasts as well as women with implants (they won’t rupture or dry out because there is no compression or radiation respectively).   It doesn’t hurt!   There is no compression or flattening of your breast.   Thermography does not just screen for Breast Cancer, it tells you how healthy your breasts are.

What’s the cost of a Breast Thermography?   It is equivalent to your five dollar trip to the coffee shop once a week for a year.   It is very affordable, ranging from $250 – $300, depending on the center.   It is well known that early detection is the best defense against breast cancer, and if found and properly treated in the early stages, a 95% cure rate could be achieved.   Breast Thermography should be regarded as an adjunct to Breast Health and should be included in every woman’s regular breast health regimen.

Dr. Dave Wendel, DC, ACN, CTT is a licensed Chiropractor and Applied Clinical Nutritionist.     Dr. Wendel has been practicing for over 20 years.   He currently practices in Jamesburg, NJ and his main focus in on Applied Clinical Nutrition, helping patients to achieve better health through lifestyle changes and designed nutritional programs. Dr. Wendel   is a member of Breast Thermography International (BTI), a group of professional that are working together to commit to scientific standards of thermography using only the most advanced imaging technology available, and board Certified Thermographers.

All of Identity’s October articles will be representing the Charity, Sole Ryeders. Sole Ryeders will be raising money for a fund to supply Breast BFFL Bags to the under-served in White Plains, NY at White Plains Hospital. Tax Deductible donations can be made directly to the hospital or Sole Ryeders. Please feel free to make a donation below.