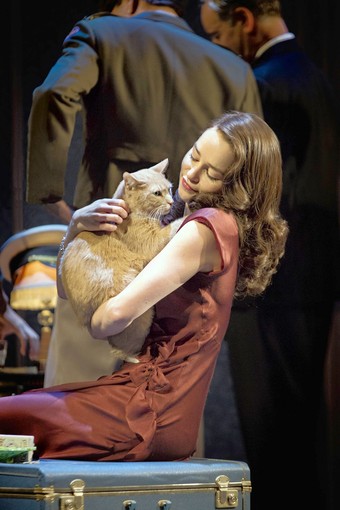 Cory Michael Smith as â€˜Fred the narrator’ and Emilla Clarke as â€˜Sally Bowles’ amazed me with their talents, and the script kept my body alert not wanting to miss a quick witty remark. And, I confess again, a very good looking naked man.

It’s not often Susan reviews a movie, a book, or a Broadway show, but it’s a rare occasion and Susan shares her confessions on Broadway.

I left the city feeling intrigued and wanting more. Not seeing the 1961 movie nor reading the 1958 book, and I confess, not knowing much at all about Truman Capote’s  Breakfast at Tiffany’s, I am on a mission to hunt down both the movie and book. I want to indulge so I can live through the oh-so-daring and free Holly Golightly, who was the lead female.

I have no clue why the critics are being so harsh on this show.   Maybe I loved it because I wasn’t comparing it to the 1961 movie or 1958 book, but even so I wouldn’t want it to be a dead on match up. Each medium should hold its own presence and give its own experience, better yet, its own identity. Why can’t they stand on their own and provide us the opportunity to appreciate each medium? Cory Michael Smith as ‘Fred the narrator’ and Emilia Clarke as ‘Holly Golightly’ amazed me with their talents, and the script kept my body alert not wanting to miss a quick witty remark. And, I confess again, a very good looking naked man.

I loved the design of the stage, the lighting and the sound effects, especially when ‘Fred’ and ‘Holly Golightly’ took a stroll on horses.   The props were fantastic and scene changes were smooth. I think my favorite prop was the live sweet, calm cat that appeared a few times. The cat even stopped by the after party at the Edison Hotel Ballroom.

I’m sharing my experience with you because Breakfast at Tiffany’s was my first premiere night, and I knew this was a big night for the stars as critics scrutinized from the crowd. Within hours after the show, I saw many negative reviews and I was flabbergasted by the harsh words.   Granted I am not a Broadway critic, but being an average young woman simply going to a Broadway show, I thought it was fantastic.   Breakfast at Tiffany’s happened to be my third Broadway show and I thought it was better than Wicked and Mary Poppins. I also have an extremely short attention span, which didn’t act up at all during the show.

I highly recommend checking out Breakfast at Tiffany’s because you get a variety within the play from singing, to dancing, to naughtiness with nudity, and of course the love story that leaves you wondering.

Helping Women Get All A’s in the Game of Life – Accept. Appreciate. Achieve.TM

My name is Susan Vernicek and I ignite and empower Mompreneurs who struggle to discover their balance between MomLife + BizLife. I help them create a winning Mompreneur Mindset so that they can consciously thrive at home and KILL IT in business —without feeling guilty and letting go of the comparison game.

With over 13 years of experience and overcoming my own emotional, financial, and physical rock bottom, I’m now thriving as a Mompreneur myself.

I’m your Mindset Igniter, a #1 Amazon Bestseller, Speaker and Coach. Let’s move you from autopilot to achieving in MomLife + BizLife! To connect directly, please Email me at Susan@identitymagazine.net