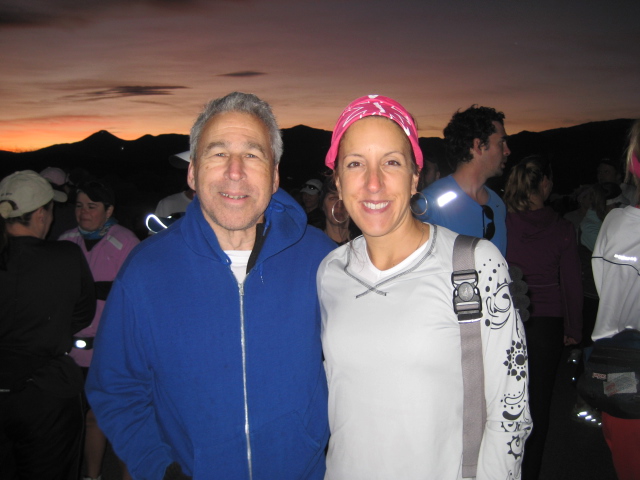 For my Dad’s 65th Birthday, I asked him if he’d like to do a half marathon with me as a â€˜gift’. Granted, 13.1 miles on foot does not really seem like a great gift, but I thought that the time spent together could be valuable.

For my Dad’s 65th Birthday, I asked him if he’d like to do a half marathon with me as a ‘gift’.   Granted, 13.1 miles on foot does not really seem like a great gift, but I thought that the time spent together could be valuable. Our usual “Dad and Daughter” pose

You see, my dad and I don’t often understand each other, and for maybe a decade or so, we had stopped taking the time to try.   While we share the same fundamental beliefs — help others in need, leave the world a better place than when you came here, and treat others as you’d like to be treated – we had trouble speaking to our similarities.   However, we had little difficulty discussing our differences — at high volumes.   Our phone conversations were filled with silences and sighs, then the quick exchange, “Is mom there?” and “Here’s your mother.”

I knew that neither of us wanted that type of relationship.   I had great memories of my dad and I going to see the Boston Celtics play, just the two of us.   Our rides and walks to the Boston Garden would be filled with endless chatter, and, by 2009, I had no idea what had happened to make those feelings of camaraderie disappear.   But I was hopeful that forging a common bond could possibly be a bridge to a new beginning.

So, in late July 2009, I asked my dad if he might enjoy doing a half marathon with me.   He and my mom, both avid walkers for as long as I can remember, had come to cheer me on at many of my races — through which they’d met many of my friends.   But the idea of doing a race himself — I was wary of what his reaction would be.

My dad listened to my proposal — pick a 13.1 mile race anywhere in the country that he’d like to visit, and, as long as he trained, I’d do it with him (I added in a ‘travel incentive’ hoping that may grease the wheel a bit).   I could picture him nodding, deep in thought, over the phone line, and, after a minute or two, he said he’d get back to me.

To be honest, I did not think he’d ever answer my question, but to my surprise, he did.   And his answer was yes!   He also had done his research because, maybe fearing I’d change my mind, he told me exactly what race he’d like to do — a half marathon in Tucson, Arizona in December.   Not only did he pick a location that would be warmer than his home in Boston, MA, he found that the date coincided with his godson’s college graduation which was nearby.

May be fearing that he’d change his mind, I quickly said, “Cool!” and hung up.   And over the next few days and calls, I went into ‘marathon coach mode’ — planning out his training, diving into proper shoe selection and lecturing him on nutrition.   I know my dad well enough to know he does not like being told what to do, but I thought if he saw me as his “race coach” rather than his “bossy kid”, we could begin our journey.

Well, that plan did not work… at first.   So, instead of getting so frustrated I would yell and hang up the phone, which had become my M.O., I changed gears.   I enlisted the help of my fellow marathon friends to help train my dad.   If they told him to get in his weekly mileage, he would — and I started receiving email updates from him charting his training.   The spreadsheet would not only include the miles walked and his pace, but funny notes about how his shoes felt and the money he found on the ground.

I started calling home asking for him and he was happy to tell me his triumphs.   My friends, inspired, and most likely intrigued, decided to do this race with us, and soon we were all headed across the country.   As a show of solidarity, I made us all shirts that had a photo of my dad and I, circa 1979, holding up ribbons after finishing our first mile race.   On the back of ours read, “Team Robert” and on the back of my dad’s read, “Happy Birthday to Me!” Race days are early days, but at 5am, my dad was ready to go.   He got into the spirit of things early, despite the pre-dawn chill, and posed for my traditional “start line selfies” and a photo with just me.   And, when the starting gun went off, so did he — moving with a determination and pace I was thrilled to see.

One of my friends and I chose to stay with him for the entire race, thinking that our chatter would help the miles pass.   Occasionally, he’d chime in — telling stories I had never heard about his father, a man I did not have the chance to know and knew very little about.   He also was quick to point out any money found on the ground, and listened when I said this was not the time to stop and pick it up.

At mile 12, I asked him what his goal finishing time would be and, looking at my pace watch, I knew we were on target.   And, as we approached the last hill, just a quarter mile from the finish, my friend’s husband yelled, “Go Robert!   You can beat your daughter if you try!”   And, liking this sense of competition, he did.

Since one of his teachings had been, “You are never given a win; you earn a win”, I thought it best we cross the finish line together — a mere 15 seconds later than his goal time.   We took our finisher photos — him looking slightly dazzled, somewhat exhausted and supremely proud of his achievement.   And he made sure to wear his medal proudly — and groan loudly – with pride of a job well done. In five years since, my dad has become a regular in our ‘traveling band of merry marathoners’ — completing his 11th half marathon this December, wearing his “Happy Birthday, Robert!” shirt every time.   Sometimes he races with me, and also travels just with my friends, or by himself.   We have gained not only some cool race medal ‘bling’, but also the bond we both hoped we’d build.   We still frustrate each other to no end, BUT we’re learning to speak the same language.

Any communication tips you have to share?   I’d love to hear them!
Identity Magazine is all about empowering women to get all A’s in the game of life — Accept. Appreciate. Achieve.TM Every contributor and expert answer the Identity 5 questions in keeping with our theme. As a team, we hope to inspire and motivate ourselves and inspire you to get all A’s.

I am working hard to accept that my dad and I may never see eye-to-eye on everything, but we do on the items most important — to be a good person, to leave the world a better place than how you found it, and to have the tip you leave at a restaurant zero-out the bill (the latter to my mother’s chagrin). I still get frustrated that we don’t always understand each other, but I am thrilled that we are both committed to working on building a relationship.

I appreciate that my dad enjoys these marathon outings — both with and without me. We recently went to Memphis, TN for the St. Jude Half Marathon that benefits the world-renowned Children’s Research Hospital. Our group was small — my father, two friends, one friend’s mother and I — and we were seeing new friends whom I’d met at an earlier race. From dinners and touring Graceland, to negotiating our tiny hotel room, I really feel that my dad had fun — and I did too.

Our New Thanksgiving Tradition – a 5K in the cold

At St. Jude, I chose to stay with my friends and enjoy the experience, rather than take off by myself and race the race. I allowed myself to relax, take it all in and really had a great time. I want to do more of that — in all aspects of life. That said, my dad is quite proud that, at St. Jude, he sped ahead in the race and finished before me — I’m just proud that he does it at all.

In the theme of this article, I’d say to ask my dad… but I kind of fear the answers! I’d guess he’d say I can be bossy, which I sometimes am. I like things to get done, not talked about with the actual action postponed. If you get the mail from the mailbox, I open, sort it and deal with it immediately; he puts it in a pile and deals with it once a week. I don’t get that, but I (finally) do understand that my bossy “Do it my way!” before, during and after does not help, so I’m learning to (try) and keep it to myself.

“I Love My… Effort. I recently told someone that “I respect failure more than I will ever tolerate not trying.” I will always do the best I can, try my hardest, in whatever I do. I may not succeed, but I will go down swinging.

How a Pair of Running Shorts Spurred on My Second Career.

As a veteran television producer and novice athlete, I decided to train for my first marathon in the hopes of finding and funding a cure for the cancer my friend was bravely battling. I spent the 26.2 miles finding fault with the ill-fitting, dysfunctional and certainly unflattering running shorts I was wearing. Seven years, thousands of miles, and even more running 'bottoms' bought, I decided that if I couldn't find fitness fashions I liked, I'd make them myself.
FACEBOOK: www.facebook.com/jwalkingdesigns
TWITTER: www.twitter.com/jwalkingdesigns