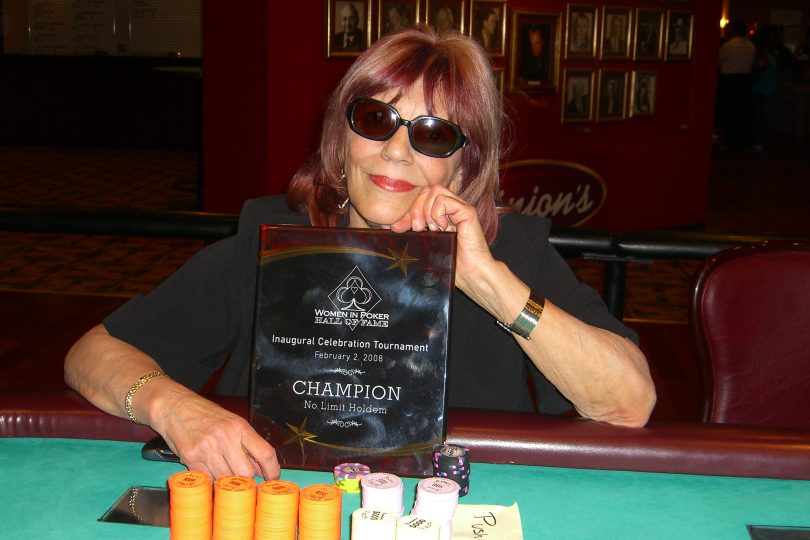 It wasn’t so long ago that the Poker world was seen as a man’s preserve. This historical game was originally played by roadside gamblers and for decades men dominated the poker scene. Popular culture depicted poker as an extremely masculine activity, and it became largely inaccessible to women. The development of professional televised events like the World Series of Poker (WSOP) brought casino activities into the mainstream, however, and in the early nineties a group of trailblazing women, including  Poker Hall of Famer Barbara Enright, won their way into the poker rooms and beyond.

This article is a celebration of some of the greatest female poker players in the world, making history whilst balancing education, careers and motherhood.

4 Women Dominate and Achieve Within the Poker World

Kathy Liebert
Kathy Liebert  has been on the professional poker scene since 1994 and is still a regular at the major tournaments today. The first woman to ever win a televised poker event, and the first player to pocket the million dollar prize at the PartyPoker Million event, Liebert has amassed over $5 million in prize money (which she shrewdly invests in the stock market). In 2004 she was one of three women to win an open event at that year’s WSOP and has been a long-term advocate of women in poker telling BodogNation that poker is ‘not a game of strength; it’s a game of intelligence…it has to do with patience and discipline, as well as memory, and so I would say that women have all of the skills and in some cases even more of the skills than men’

Victoria Coren Mitchell
The writer, columnist, TV quiz show host and wife and mother is also one of the best British female poker players of the 21st Century. Victoria Coren Mitchell made history in 2014 by become the first player to  twice win the PokerStars European Poker Tour, and she has accrued over $1.5 million in prize winnings. A keen player since her teens, Coren Mitchell has led a high profile career in poker that has included membership of the PokerStars Pro team and participation in numerous televised events and celebrity poker challenges. She’s even  written a book  about her passion for poker!

Annette Obrestad
The advent of online gambling also gave rise to a new generation of female poker players, who would play against their male peers in the comforts of a virtual poker room. Annette Obrestad, aka ‘Annette_15’ was one such player,  and in 2007  she went on to become the youngest ever player (male or female) to win a WSOP bracelet in the Europe Main Event. Pocketing a cool £1,000,000 the day before her 19th birthday, Annette has reportedly never made a deposit into an online poker room but built her bankroll the hard way by playing freeroll games.

Vanessa Selbst
Not even 35 years of age and the only woman to ever reach the  World No. 1 ranking on the Global Poker Index, Vanessa Selbst is arguably the most successful female player in the world to date. With 3 WSOP bracelets to her name, all won in open field events, Selbst is the only player to ever win back-to-back North American Poker Tour main events. The two-time Yale graduate has amassed a fortune of over $10 million and has been the first female player to play in a Super-High Roller event (taking 3rd place at the PokerStars Caribbean Adventure $100,000 buy in tournament in January 2014) and the highest earning female player in poker history with a $1.4 million win at the 2013 PCA high roller.

Identity Magazine is all about guiding women to discover their powers of Self-Acceptance, Appreciation, and Personal Achievement. We ask that every contributor and expert answer  the Identity 5 questions in keeping with our theme. Their answers can be random and in the moment or they can be aligned with the current article they have written. In that way, and as a team, we hope to encourage and motivate each other, thus inspiring  you to Get All A’s.

1. What have you accepted within your life, physically and/or mentally?Additionally, what are you still working on accepting? Now, we’re talking about resignation, rather stepping into, embraced, and owned.

I’ve accepted that I am where I am and that’s a good thing.

2. What have you learned to appreciate about yourself and/or within your life, physically and mentally? On the other hand OR in contrast, are there elements of who you are that you’re still working on appreciating?

I  appreciate my mind.

3. What is one of your most rewarding achievements in life? Tell us not only what makes YOU most proud but also share the  goals and dreams that you still have.

I’m proud of living my dream as a freelance writer.

4. Of course, we all have imperfections, or so we think. In truth, we are all perfectly imperfect. What are your not-so-perfect ways?  Likewise, what imperfections and quirks create who you are–your Identity?

I’m far from perfect and I’m okay with that.

5. “I Love My…” is an outlet for you to appreciate and express all the positive traits that make you…well…YOU! In fact, sharing what you love about yourself will make you smile, feel empowered, and uplift your spirit and soul. (We assure you!) Therefore, Identity challenges you to complete the phrase “I Love My…?”

I love my  poker skills

Manuela Muroni enjoys the life of a freelance writer