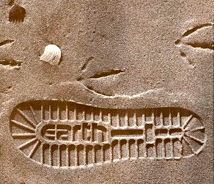 April 22 is the 50th anniversary of Earth Day.

Most of the world is at home trying to avoid the Coronavirus; Mother Nature is saying thank you.

It’s ironic that on the eve of Earth Day, a pandemic is giving the planet the reprieve it needs to replenish. Mother Nature has a moment to breathe easier, reset, while we humans are freaking out. Our collective mantra has become a variation of ‘Stay safe, stay healthy, stay home, stay sane.’

For the first time in years, pollution levels have decreased, fish can be seen swimming in the canals of Venice, and the Himalayan Mountain Range is visible from more than 100 miles away.

Who knows how this will all turn out. Perhaps there will be a raised global consciousness or we’ll shift our priorities for the greater good. Hopefully, it’s not simply back to business as usual, with no meaningful lessons learned and implemented.

That day and what followed had a monumental impact on me, my family, and a generation.

The heel was lower than the toe, and they became a staple of the ‘70s hippie counterculture movement.

In 1969, while on a family vacation in Copenhagen, Denmark, my parents accidentally discovered the shoes. With their strange design, the shoes offered the promise of salvation for my mother, who had chronic foot pain and backaches. Her pain quickly diminished within days of wearing a pair.

A week later, my parents realized this could be a new business venture.  Raymond, my Dad was a prominent photographer with a perpetual entrepreneurial spirit, and Eleanor, my mom was an artist at that time.

The concept of the shoe was to replicate walking barefoot in the sand. Anne Kalsø, the inventor, was a 60-year-old Danish yoga teacher. She tested who her shoes walking 500 miles in the Faroe Islands.

Anne only agreed to meet my parents after having their astrological charts done and getting their assurance that they had never been in the shoe industry.

Anne granted them the U.S. distribution rights, and with the success of the company, she later gave them worldwide rights.

Opening a retail store in our neighborhood was a calculated risk. Yet on April 22, 1970, they opened a shop in the storefront of their brownstone on East 17th Street in New York City.

The neighborhood was seedy, filled with junkies and empty warehouse buildings that were not yet multi-million-dollar condos.

With a hand-written ‘Anne Kalsø Minus-Heels’ sign in the window, my parents anxiously awaited customers. The block was quiet and deserted, as always, except for us kids who played in the street as if it were our own backyard.

Suddenly, floods of Dashiki- and love-bead-wearing hippies strolled past the shop on our deserted street.

Curious, mom asked what was going on. One replied, “Hey man, it’s Earth Day. Join us at Union Square for a Love-In.”

Inspiration struck. My parents immediately replaced the window sign with ‘Earth Shoes.’ In the fortuitous instance, Earth Shoes and a movement were born. Many more stores subsequently opened across the US and Canada.

A name change and a simple sign instantly branded the shoe. Flower children poured into the store from that day forward. Many loved the shoes but couldn’t afford the $27 price tag. In the spirit of the times, mom offered them the shoes for free. She said to come back and pay for them if and when they could. Dad rolled his eyes in shock; mom just said, “Trust me.”

Miraculously, they all came back with friends, not only paying their debt but helping to sell more shoes.

Our sleepy block was transformed into a bustling hangout for hippies filled with peace, love, and shoes.

A love affair began between a break-all-business-rules shoe company and the era’s counterculture.

No-one expected the shoes to become a global phenomenon.

The media frenzy started soon after the Whole Earth Catalogue featured Earth Shoes. The mainstream and business media followed with frequent articles about the shoes and my parents. Actor Orson Bean wore the shoes on Johnny Carson’s “The Tonight Show.” The shoes were in Time magazine’s billboards at Grand Central Terminal and bus stops throughout the city. The ad read, “Time – Where the Earth Shoe Fits Naturally.” The Metropolitan Museum of Art requested a pair for its permanent shoe collection as an iconic example of the decade.

This pre-technology ‘70s version of a social media campaign was completely organic, dynamic, and successful.

Activist, comedian, conspiracy theorist, and writer Dick Gregory wore the shoes and became friends with my parents. When he visited, he talked for hours about his commitment to eradicate global hunger, and a slew of conspiracy theories. Maybe they were true, maybe not.

Gregory introduced us to Frances Moore Lappé’s Diet for a Small Planet, her 1971 bestseller about the impact of eating meat and its contribution to global food scarcity, and to Rachel Carson’s 1962 environmental bestseller Silent Spring. Both books were early eye-openers about the dangerous impact of our behavior on the environment.

Earth Day 1970 took place at Union Square. It featured a large tent filled with ‘fresh country air.’  Who knows how they got fresh country air into the middle of Manhattan, but it was fun to inhale deeply, convinced that we felt healthier.

The Viet Nam War was raging and protest slogans like, ‘Make love not war’ were prevalent. Jimi and Janice died.

On that first Earth Day, approximately 20 million people participated in peaceful demonstrations across the country.

Despite environmental strides made over the years, clearly, we didn’t pay enough attention to protecting Mother Earth. Instead, we have compromised the planet and future generations.

Earth Shoes became very successful. Celebrities including Johnny Cash, Marvin Gaye, Norman Mailer, Dizzy Gillespie, Peter Fonda, and Alan Ginsburg joined the Earth Shoe love affair. At its peak, print ads read, “Please be patient, we’re making our shoes as fast as we can.” Worldwide, the company grew to a $14 million retail business with more than 100 privately owned stores and its own factory.

Chemical Bank unexpectedly called in the $2 million loan Earth Shoes owed against its line of credit. This forced the profitable, industry-changing company to file bankruptcy and close in 1977.

Time has passed, shoe styles have come and gone. Now, on the 50th birthday of Earth Day, we’re living through a pandemic that is impacting the health and wellbeing of the entire world. The free-spirited, trusting environment I experienced throughout my formative years seems all the more poignant.

What my parents did organically, intuitively, and fearlessly, would today be considered strategic marketing ingenuity and branding genius.

They were not afraid to break the rules, to think outside the shoebox.

It was the ultimate lifestyle marketing campaign; the result of a great product, perfect cultural and historic timing, and my parent’s business acumen and non-conforming approach. Clearly, the planets were aligned and indeed, it was ‘astrologically correct.’

On that first Earth Day in 1970, the world was full of opportunities awaiting me; anything was possible. This year’s Earth Day will be different. It must be celebrated online due to social distancing, stay-at-home directives, and a pandemic that is mostly preventing anything other than digital experiences. Hopefully, it will still draw millions of participants.

Nelson Mandela said “Children are our greatest treasure. They are our future.”

The youth of yesteryear stood up, had a voice, gathered, made love not war. Today, our youth are forced to be home schooled, stay inside, and are no doubt asking endless unanswerable questions. Isolation may be the new norm. Will we ever gather again?

Technology is an amazing tool but is no substitute for the human experience. Now more than ever, it’s on all of us to stand together, protect the health of our planet, and each other.

On April 22, as we wash our hands incessantly for 20 seconds, let’s sing Happy Earth Day instead of Happy Birthday.

I appreciate my  ability to manifest yet still haven’t  owned it. I appreciate all that’s brought me to where I am. I’m still working on appreciating the magnificence of all that I am capable of!

2. What have you learned to appreciate about yourself and/or within your life, physically and mentally?  On the other hand  OR in contrast,  are there elements of who you are that you’re still working on  appreciating?

I’ve accepted that the older I get, the less I know!  I’m accepting more the concept of surrendering to how things turn out, while still remaining in integrity with myself.  I’ve accepted that I will be a work-in-progress until the end.  Speaking with my mom who is 86 and my aunt who is 80 – they’re both still going through a lot of the emotional stuff that I thought would be long gone.  So, I accept that evolution continues until death!

3. What is one of your most rewarding achievements in life? Tell us  not only  what makes YOU most proud  but also  share the  goals and dreams that you still have.

Being an inspiration to others.  To be an example of what’s possible through my numerous reinventions.  Goals and dreams – to become a best-selling New York Times author, to inspire and empower women around the world to speak and live their truth through sharing my stories and giving voice to other’s stories that matter.  This is an ongoing work-in-progress so am excited to see how it continues to unfold.

Writing has been part of my DNA, career, and creative outlet for as long as I can remember. My joy is bringing to life stories of the world, its people, and its cultures.

I'm filled with an insatiable curiosity for life off-the-beaten-path and love to share stories of the unheard voices I find along the way.

Giving voice to things that matter, raising awareness, and expanding perspectives is what lights my fire and is the heart and soul of who I am and what I do.