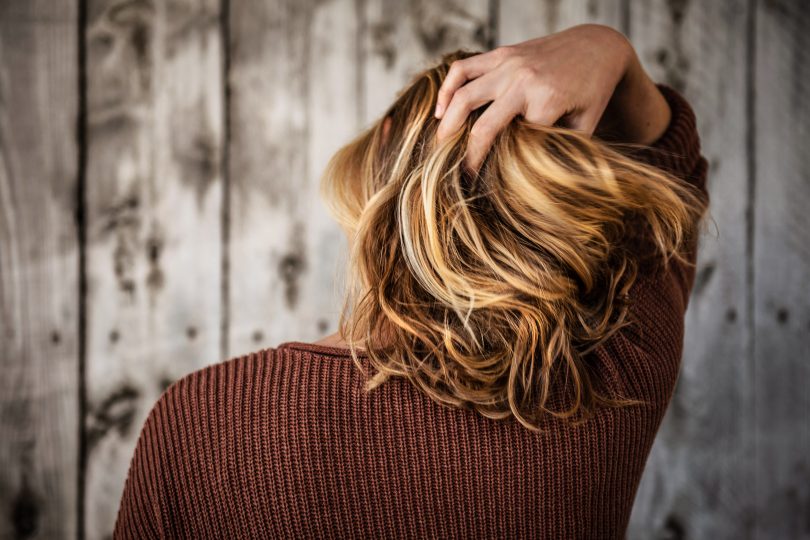 Once my hair began to fall out, I wanted to be invisible again. I crept back into the little shell that I had lived in all during my childhood

As a teenager in the 1960’s, I loved watching a Breck shampoo television commercial, in which a beautiful girl would swing her gorgeous long hair side to side in slow motion, the camera capturing a glorious waterfall of thick, glossy, healthy hair.

I was very proud of what I considered to be my best asset; my own shiny, long brown hair, and I used to practice that same move in front of my bathroom mirror, knowing that my hair was pretty enough to qualify for a Breck commercial.

I fantasized that someday I might be ‘discovered’ and would become a Breck Girl myself.

That fantasy came to a screeching halt when I began losing my hair in 1964 at the age of 16, a few months into my junior year of high school in Pacifica, Cali.

I had just entered Terra Nova High the year before, after having spent all my childhood moving around the state of Kansas and California. I was the second oldest of eight children, born to parents with wanderlust who were not interested in nurturing their large brood.   Our life, to me, was not normal.

With low self-esteem, I always felt shy and reluctantly endured being the new kid in the succession of schools I attended, trying very hard not to be noticed. I wanted to be invisible and was careful never to draw attention to myself.

When my family bought our first home in Pacifica in 1963, I knew that we would not be moving for awhile, and I decided to avail myself of the opportunities my new school offered in a way that I never had before. I joined clubs, vocal groups, and even the Pom Pom squad. I started to feel that, finally, I belonged. I was making friends, and I realized that it was fun to be noticed.   I began to feel like a normal kid for the first time in my life. Once my hair began to fall out, I wanted to be invisible again.

I crept back into the little shell that I had lived in all during my childhood. I stopped making eye contact, and quit the clubs, vocal groups and did not try out for Pom Pom for a second season.

I knew I was on my own when I tried to tell my mother what was happening to my hair. She turned away from me and said, “That’s ridiculous. Women don’t lose their hair! Get your ironing done!” I was sad, lonely, and felt like a freak.

I skipped college and immediately got a job after graduating, so that I could afford to visit doctor after doctor, hoping to find the cause of, and cure for, my hair loss. I spent much of my time crying, raging, and being in denial about what was happening to me.

After searching unsuccessfully for decades to find the right doctor, the right meds, the right kind of shampoo to cure my problem, I finally found a doctor who diagnosed me correctly.

I was 35 and had been married for about 9 years when I was told that I had inherited the female version of male pattern baldness, called Androgenetic Alopecia. The doctor said that not only would my hair never come back, but it would continue to shed until my entire scalp was visible and no amount of ‘comb overs’ would camouflage the thinning. “But,” he said with a grin, “at least you know it isn’t life threatening.” I was devastated.

Having female pattern baldness was, to me at least, quality-of-life-threatening.   This news was especially hard to accept since I had always assumed I’d find some medication or treatment which would bring back my glorious hair; the one asset I had, of which I had been so proud.

After the diagnosis, I spent several months in a deep depression and my fear of being around people became almost phobic. One day, however, I woke up and realized I was tired of the tears. I was tired of ‘living my hair loss.’  For years, I had been told by people very close to me that I was being vain and shallow for crying about my hair and I felt very guilty that it had bothered me so much.

I took a deep breath and decided to find a way to live with my condition.

It was too exhausting and demoralizing to continue crying and grieving over something I could not change.

About that time, my husband suggested I start wearing a wig. Although it was a shock at first, and I was offended at his suggestion, it did make me think and it got the ‘ball rolling’ towards acceptance of my condition.

My wonderful mother-in-law generously offered to buy me a beautiful hair piece and soon after, I met a sweet woman about my age with the same hair loss condition. She and I began to search for information and options and together found a fabulous hairpiece and an equally fabulous stylist named Charle Dewitt.

After Charle styled my hair piece, it was apparent that she and I had a great rapport, and I began working with her in the hair replacement industry, consulting with other women who were also losing their hair.

Several of Charle’s clients were breast cancer patients, and I can’t even count the number of times a woman with breast cancer would tell me that losing a breast was not such a big deal, but losing their hair to the chemotherapy treatments was devastating.

Those comments did two things for me; one, they validated how traumatic hair loss is, and two; they helped me realize that being devastated about your hair loss is perfectly normal.

These women helped me feel good about myself again.   I felt vindicated for the anguish my hair had caused me, and it felt wonderful to let go of the guilt, and start to feel ‘whole’ again.

It was satisfying to work with women who were distraught about their hair, offering them the support, nurturing, and understanding that I had not been given when I went through my own hair loss. My mother could not talk about what I had experienced, and of course could not offer me any kind of support, emotional or otherwise.

Years later,  she literally scampered from the room when I started to remove my hair piece, hovering in the hallway, then asking in a quivery little voice whether it was ‘safe’ (i.e., had I covered up my thin hair so that she would not have to see it?)  to return to the room. I think she must have thought I was contagious.  It’s a good thing I had long since gotten over feeling like a freak!

I have made women’s hair loss a kind of calling.  Several years ago, I was invited to appear on the Today Show and was interviewed by Katie Couric, who asked me on national television how it felt to be called ‘baldy’ by my best friend in high school.  Quite a cathartic experience!

I am currently writing a book entitled “Coping with Chronic Bad Hair Day”, and have recently signed up to be a general volunteer for the American Cancer Society’s “Look Good, Feel Better” program.

I have also designed a line of headwraps and accessories for women who have lost their hair, and I often communicate via email or face to face consultation with cancer patients and women with any type of hair loss.   In addition, I write a blog entitled “Alopecia Musings” about the emotional ramifications of hair loss.

Accepting my hair loss taught me to appreciate what I have, what I’ve done, and who I have become.   I’m a lucky woman.

I have learned to accept the fact that my hair fell out (at age 16), and I will be wearing a hair piece or some type of head covering for the rest of my life.   Throughout my life, I have used coping techniques that I developed for myself during my teen years to deal with any upheavals in my life.

Appreciation is everything. What have you learned to appreciate about yourself and/or within your life, physically and mentally? On the other hand OR in contrast, are there elements of who you are that you’re still working on appreciating?

I am the second oldest of eight children born to parents who were dysfunctional, nomadic, and not at all interested in raising and/or nurturing their children.   I appreciate my life now, which is stable with a loving husband and a brilliant child who is a recent college graduate. I get vicarious enjoyment out of the kind of secure upbringing my husband and I were able to give our child.

Share with us one of your most rewarding achievements in life? Tell us not only what makes YOU most proud but also share the goals and dreams that you still have.

I have made women’s hair loss a kind of calling.  I   think that having lost my hair at such a young age has made me an empathetic person who is always looking for ways to help solve troublesome issues that others are experiencing. I   write a blog on the emotional ramifications of women’s hair loss (headwrapguru.blogspot.com).

I also started a home-based business offering the headwraps and accessories I have designed especially for women with any type of hair loss. My “Headwrap of Marin” collection (available on www.ninisniche.etsy.com) has been called ‘a work of art’, and ‘couture.’  A frequent customer writes to me ‘Linda, I love everything you do!’  This makes me incredibly proud! I was given an opportunity when I lost my hair. Wwhen life handed me a lemon, I made lemonade!

About Linda: Many women value their hair as an asset to their identities. But what happens when a woman begins to lose her hair? Linda had always felt that her hair was one of her best physical characteristics.

However, at age 16, she began to lose it. Years later, Linda is able to appreciate her experience with hair loss and is able to give back to other women who may be going through the same thing. She has found a new identity and has gained so much after losing her hair.

Photo by Tim Mossholder on Unsplash