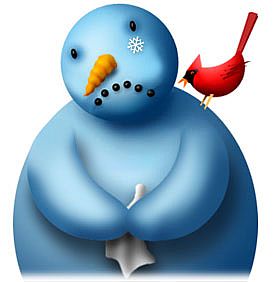 Around this time of year I get depressed. I try to face it head on in hopes it won’t overcome me. I over compensate and try to be extra positive. But it wins. So this year, instead of judging myself for it or trying to pretend it isn’t there, I decided to give myself a break and keep a few things in mind while I battle the Holiday Blues.

Oooooh, the weather outside is frightful and the fire is so….blah.

Around this time of year I get the Holiday Blues. I try to face it head on in hopes it won’t overcome me. I over compensate and try to be extra positive. But it wins. So this year, instead of judging myself for it or trying to pretend the Holiday Blues aren’t here, I decided to give myself a break and keep a few things in mind while I battle the Holiday Blues.

1. I remind myself that behind every photo is a crashing reality. I am in a great relationship and I like my family and all that jazz but I can still spiral down when I look at a friend’s pictures that they’ve posted on the internet. “They look like they have the perfect life,” I think at first. This can contribute to the Holiday Blues. But then, I realize that the smiling couple having a romantic dinner started arguing directly after their picture was taken. The tight knit family I’m looking at came together for this photo op and then immediately dispersed into different rooms alone until dinner. The adorable baby in a tiny Santa Suit? Right after mom said, “cheese,” the baby threw up all over the expensive new jacket for which mommy had saved up. All the happiness on Facebook is completely assumed.

2. I’m wearing more skirts. When I’m eating healthy and exercising regularly, one pair of my jeans is a little snug, one pair are slightly too big and two pairs fit me perfectly. Back in November, when I gained a few pounds after Thanksgiving, I gave up on my perfectly fitting pants and moved on to my bigger pair. I told myself I’d get back to my normal pants by December. Then I just hoped I could get back into my bigger pants by December. Yeah, right. My ass ain’t getting in those things. And for now, I don’t care. It’s the freaking holidays. For now, I’ll just rock a loose fitting dress and some boots and call it a day.

3. I do not look at pictures of myself taken with an iPhone camera – it just adds to the Holiday Blues. Not mine or anyone else’s. This is just a general note for all times of the year. I mean, did Steve Jobs conspire with the botox industry when he created this thing? I took an impromptu snap of myself the other day and I thought I had downloaded one of those “see how you would look in twenty years” apps. Never again. I’m using an actual camera to capture the moment, thank you very much. And then I’m gonna post them on Facebook to make other people jealous.  Other people can suffer the Holiday Blues this time.